PROPHECY OF MAGIC is now available on all ebook platforms. Buy it today for 99cents before the price goes up!

Sienna did not need to start having feelings for Matthew again. At least not with the gargoyles missing. A clear head was far more to her advantage than was a pining heart.

Taking a deep breath, she tamped down any sparks that had started to flare in her soul.  “I know this Devil dude is of the sordid sort but remaining righteous in this instance isn’t going to help us one bit. We need to be as deviant as are those beasts who screwed us over by stealing the gargoyles. No sin is too high a price to get those statues back.”

“Trust me, Sienna. What I have in mind will take us both straight to hell.” His lips brushed against hers.

A zing of energy shot through Sienna’s veins, starting at the top of her head and twisting right down to the tips of her toes. She parted her lips.

The refreshing taste of mint tingled her tongue.

She closed her eyes, reveled in the warmth exuding from every inch of Matt’s strong, firm, six-foot-two body. If ever there was a soul who could bewitch her, it was Matthew Witchwood. The man was a god in every sense of the word. And he knew exactly how to use his charms to win her over, despite his actions a year ago.

Infuriating beast. One frickin’ kiss and she was lost to the man.

A series of scandalous images flooded her mind.

She pushed them back, but as Matt deepened their kiss, the images returned with a vengeance.

The tamest of the visions consisted of a naked Matthew sprawled in her king-sized bed, her purple silk sheet draped solely over his private parts.

This was so not the clear head she needed.

He pulled her close.

The bulge in his jeans pressed against her.

This was so not helping the matter.

She moaned, delved her tongue deeper into Matt’s mouth.

Crap. Now the image in her head didn’t even have a silk sheet!

She wrapped her arms around Matt’s neck, entwined her fingers in his hair.

If only they could have been this way a year ago rather than having that stupid fight about the charities.

She broke their kiss, pulled away just enough to speak. “Matthew?”

“Please tell me you traded in that cute little pug for a ten-foot tall viper with glowing red eyes.”

“Now why would I have done a daft thing like that?”

A hiss reverberated against her wrist.

“I stand corrected. I need rescuing.”

What’s Inside Souls and Shadows?In the midst of darkened shadows, love abounds, secrets will be revealed, and souls will be set free. Escape to new worlds with dark and striking creatures and follow beautiful beasts, cunning witches, shadowy necromancers and many more as they fall in love and brave the night.Start the paranormal adventure of a lifetime and see if you are brave enough to fall in love. Souls and Shadows is a LIMITED EDITION paranormal romance and fantasy collection with 25 novels written by some of today’s hottest best-selling and rising authors.Some of the books exclusive to the collection are:

One lover is lying. The other will kill them all.Tessa Harrison does not know her ex is the Sea King, a fae who needs her powers to save his kingdom. His enemy, the cursed sea captain Maxwell Stokes, is determined to stop him. One offers Tessa his crown, the other the last moments of a doomed life. The wrong choice could destroy two worlds.A Urban Fantasy Romance by Sharon Ashwood – Bestiary: Fae/Sea Creatures

He dared call a goddess’s name…and now danger threatens all he loves.Stavros didn’t realize he called a goddess when he invoked the Mormo. Now it is not only Nyssa, the Mormo, who is coming to find him…A Paranormal Romance by Claire Davon – Bestiary: Mormo

He is a man who lives for only one thing. Revenge.For two long years, panther shifter Rayne has chased the man who was once his best friend. But then Hailey gets into the focus of his enemy, and Rayne has to decide between his hunger for revenge and the life of an innocent woman.A Paranormal Romance by Jenny Foster – Bestiary: Panther Shifter

Evil has tipped the scales in the balance of time. Ember Brighton just doesn’t know it yet.Ember’s family has been keeping a secret that will change her fate, and time itself. When a shifter with malicious plans goes on the warpath against Ember, she’ll need all the help she can get to stop him…even if that help comes from the mysterious, too sexy for his own good, Rane Andersson.A Paranormal Romance by Anna Applegate – Bestiary: Time Traveler / Vampire

Beyond the grave, lies only death.After beheading the arch vampire Micah and laying his evil to rest, Holly George thinks her troubles are over, but no. They are just beginning. She may not be undead, but her cells are changing, and she is human no more.An Urban Fantasy by Adrienne Blake – Bestiary: Necromancer/Witch/Demon

Magick has a mind of its own…Matthew and Sienna are witches racing against time to save their bloodlines from the evil shadowing them.A Paranormal Romance by Armae/Sams – Bestiary: Gargoyle/Witches

Of Curses and Scandals

Magic has always been the thing that she relied on. Until now…Scandal is a sorceress who works with the police to solve crimes, but when a series of villains threatens her city, she will uncover the true cost of her magic. An Urban Fantasy by Julie Kramer – Bestiary: Sorceress

Detective Mila Moroz never believed in life after death. Until the dead came calling. After a serial killer’s return, Detective Mila Moroz is sought out by a dark force. Determined to stop him, she seeks help from necromancer, Odyn Broussard who guides the beauty down a dangerous path. Now, bodies aren’t just piling up. They’re demanding justice.An Urban Fantasy by Cora Kenborn & Dani Rene – Bestiary: Necromancer

First Rule of the Coven: Never Break Another Witch’s Spell.Hunted by mythical beasts, scorned by the witch who raised her, and abhorred by other covens, Iris Valka must claim her powers before it’s too late. Her life, and that of her twin sister, Emma’s, is at stake.A Paranormal Romance by S.A. McClure – Bestiary: Witches/Inkwell/Banshee

Would the safety of your loved ones be a fair trade for a piece of your soul? Natasha Taylor is about to find out.An Urban Fantasy Romance by Lori Titus – Bestiary: Demons/Witches

The power of Mother Earth is on her side.As Mother Earth in human form, Gaia Charmer has all the power of the world behind her. But will even that be enough for this sexy, gutsy private eye to solve the mystery of her missing Landkind friends? An Urban Fantasy by Robert Jeschonek – Bestiary: Landkind (humans w/souls and powers of landforms)

What would you sacrifice for love?Heather is a superhero in San Diego, but she yearns for a different life. A dark deal with a local gang promises her freedom, but it might just come at too high a cost.An Urban Fantasy by Emerald Dodge – Bestiary: Superheroes

From Eugene with Love

When things look desperate, who would you turn for help?Pestilence’s Intern has done it again. Another dangerous drug has gone missing, and this time his colleague is missing as well. An Urban Fantasy by D. C. Gomez – Bestiary: Werewolves

A vampire and a werewolf walk into a crime scene.It’s bound to be one hell of a week for Laurent & Shaw, the vampire-werewolf detective duo who solve the city’s paranormal crimes. The clock is ticking, because it’s almost full moon and Samira is about to turn. Will they find out who is behind the conspiracy before it’s too late?An Urban Fantasy by JT Lawrence – Bestiary: Vampires / Werewolves

Being the Alpha is one thing but the first female alpha, above the males won’t be easy… will Aribelle suceeed or be killed to make room for a male?Aribelle doesn’t want to be the alpha but what she wants doesn’t matter. She’s forced to make choices she never expected to make.A Paranormal Romance by McKayla Schutt – Bestiary: Werewolves and Witches

People assume we can’t survive without our souls…Just as Haven’s discovered people existing as Shells, she meets Caleb, a beautiful soul she’s undeniably drawn to. Now she has to choose—her heart or the fate of humanity.An Urban Fantasy by Tamar Sloan – Bestiary: Wraith

Magik and love break all the rules…In a world where magic means death, Katriana will risk everything to save her royal charge—even when it means outing herself as a witch and losing the love of the forbidden prince.A Paranormal Romance by Michele Barrow-Belisle – Bestiary: Witches / Demons

Are you brave enough to fall in love?One click to summon your copy today. For only 99 cents you can get lost in all new worlds.Pre-order now so you don’t miss out on what is bound to be the most adventurous, seductive, and thrilling box set of the year!

Preorder “Souls and Shadows” and Get your Freebies: https://books2read.com/u/4AJgrJ

One of the best things about writing WITCHWOOD, my contribution to the SOULS AND SHADOWS box set, is that I’m co-writing the story with my dear friend Candace Sams. We both love gargoyles and witches, so combining the two in WITCHWOOD was a lot of fun. Plus, there’s Henry, Sienna Stone’s talking, immortal, mini-pet pig. Sienna isn’t your typical witch, with a typical cat.

Available now in SOULS AND SHADOWS!

Can true love survive the darkest of prophecies?

These stories include all of your favorite mythical creatures, from gods and angels, to vampires and fae, to shifters, demons, witches, gargoyles, and more! With so much magic involved…what could possibly go wrong?

Dare to explore the shadows . . .
Join our heroes and heroines as they open their souls to the shadows in this boxed set from 25 of today’s hottest authors! Pre-order now for only 99c and receive 17 extra ebooks ABSOLUTELY FREE! 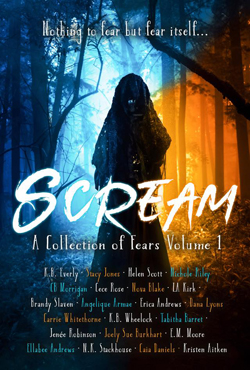 SCREAM: A Collection of Fears Volume 1 is now available! 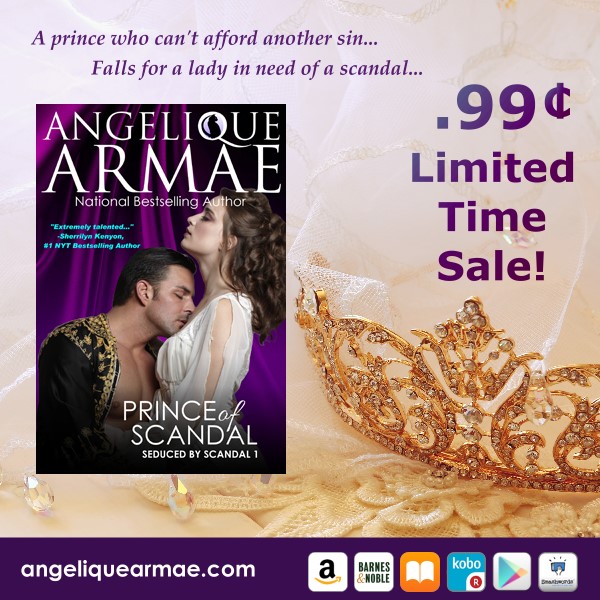 Here’s a sneak peek at ECLIPSE available exclusively in Realms and Rebels.  REALMS and REBELS is available now for the special pre-order only price of 99 cents. Price  goes up release day! 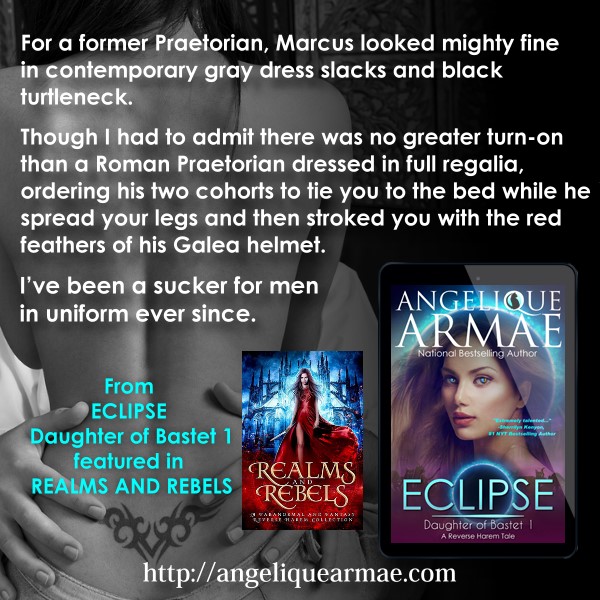 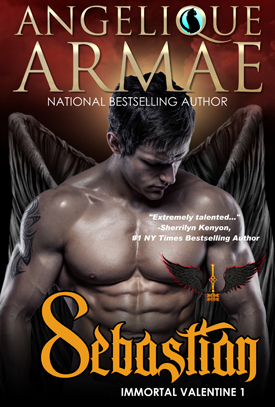 Sophie Gates had one New Year’s resolution…then came along Hell’s darkest bad boy, Sebastian Valentine, and her do over went out the window.

Now she has forty-eight hours to declare Sebastian a cold-blooded killer or a saintly savior. But proving his innocence isn’t easy when the task lands her on Hell’s most dangerous hit list. And being targeted by Hell’s Pit Lord might not have anything to do with the sinfully sexy Sebastian Valentine.

But on a cold January night, when he comes face to face with a demonic messenger—and a dead body that has his vampiric essence stamped all over it, the same residual energies needed to manufacture Crypt Candy—the tables are turned.

Now his fate rests in the hands of an immortal human trained in angelic warfare—Sophie Gates. But putting his trust in the care of the one woman he secretly gave up half his soul to protect, places them both in the utmost danger.

Two fates entangled in the war between Heaven and Hell…

Temptation hasn’t been this sinful since the fall of Eden.