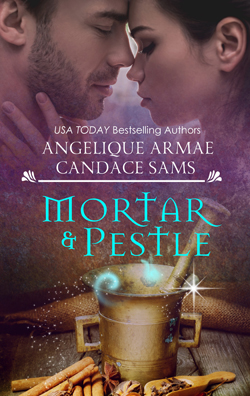 MORTAR AND PESTLE
By Angelique Armae and Candace Sams
June 26, 2020

In an alternate realty where magic abounds, witch Elizabeth Ghoul and Code Enforcer Gareth McAllister must track down The Mage, New York City’s most wanted thief, or the five-hundred-year-old curse that vexes both their families will be irreversible.

A Clash of Old and New, Dark and Light…

In 1559, the mortar and pestle of witch Hester Omen suffered a curse, forever condemning those born of her blood.

Now, in contemporary New York, the relic is stolen. Leaving Hester’s descendant, Elizabeth Ghoul, with no tool from which to reverse the hex.

Please note - this book was previously released in Prophecy of Magic box set. This edition is an expanded version.