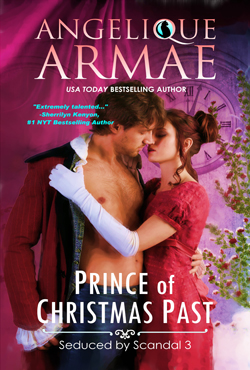 Previously released in UNWRAPPING A ROGUE.

PRINCE OF CHRISTMAS PAST is the third book in National Bestselling Author, Angelique Armae's, Bestselling Regency series Seduced by Scandal.

A second chance at love…

Prince Victor of Countavia isn’t accustomed to losing. Whether it be at cards, horses, or hearts, he always comes out on top. Yet a year ago, the extraordinary Charlotte Appleton slipped through his fingers without so much as a single parting word. Now the tempting seductress is back, and she’s challenged him to a game of arrows where the loser must reveal all.

Charlotte Appleton might come from a well-to-do family who can buy their way out of the worst of scandals, but she knows there is no such thing as redemption from one’s own sins. Especially when said sins involve a prince of the realm. So when Victor shows up at the same Winter Charity Festival as she’s attending, Charlotte knows she has no right to entice the prince again. But her heart is finding it hard to listen to her sensible head.

Warning: Contains one sexy game of archery and one prince with twelve steamy gifts of Christmas.

Previously released in UNWRAPPING A ROGUE.