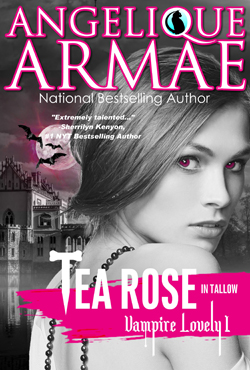 When twelve sisters inherit a clan of Irish vampires, they embark on a journey of magick, danger, and ultimately love…

Moira McKinley is Queen of Organized Chaos. She's surrogate mother to her eleven orphaned sisters, eats cereal for dinner, and grows window box herbs with a green thumb. In other words, she lives a pretty normal life. That is until she receives news that challenges everything she holds dear…

It isn't every day an Irish solicitor shows up on your suburban New York doorstep telling you your eighty-five-year-old granny has gone missing. And stranger still, reveals that the woman who has nurtured you for the last ten years isn't the soul you thought she was, but rather is some ancient guardian descended of the gods and whose first duty is not to her human bloodline but to a clan of immortal warriors tasked with saving the world.

That and the fact the gates of the Celtic Otherworld-Mag Mell-have just crashed, unleashing the vilest of Fae demons. And as an extra kicker, just in case all that other stuff isn't enough to cozy your brain up to, you and your sisters aren't really as batcrazy as you always thought. Those little habits you shucked up to nuisance, like waking up in the middle of the night wrapped in thorny briars…while still in your bed…are all par for the course when you're made up of stuff that feeds the dark side.

Stuff those Fae demons are on the hunt after.

Stuff those immortal warriors are determined to protect.

Stuff only missing granny holds the key to…