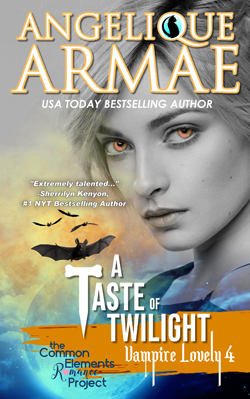 Rose McKinley is a modern-day witch whipping up centuries-old curses in this bewitching tale of baking magick gone awry.

Rose McKinley isn't normal by a long shot. For starters, she's the granddaughter of Ireland's greatest war goddess, the sister of eleven cursed witches, and the favorite slave of one bad-ass demon cat. But even with all that dysfunctional chaos swarming around her everyday life, nothing prepares Rose for the darkness which is about to storm into her world. Namely, one Liam Darcy, a vampire member of Finn MacCool's immortal Fianna warriors. If only her explosive pumpkin pie recipe hadn't raised the sinfully sexy man from the dead….

Liam Darcy enjoys being vampire. He sleeps until dusk, inhabits a dungeon furnished with the best coffin money can buy, and he's outlived the worst of his enemies—namely his ex-betrothed who while still alive was gunning for his head. And not just the one on his shoulders. All is good in his dark, preternatural world. That was until this morning, when the faintest traces of pumpkin pie flitted into his underground abode and forced his fangs to descend to the point they will no longer recede. Not to mention resurrected the ghosts of his long deceased foes. Now, not only must he fend off the seething spirits of a sword-wielding, mad Irish woman and her long-dead brothers, but he must also protect his queen's granddaughter—the enchanting Rose McKinley, the same American witch who brought back his worst nightmare. Too bad Rose's forbidden blood is the only thing that will tame his fangs' cravings. And sate his enemies' longings for justice.