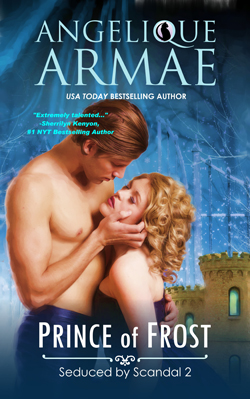 When a bearish prince stirs from hibernation…

Prince Leopold of Countavia isn't your typical royal. He harbors a deep secret that forces him to shun public life save for his charity work. Due to this, he resides in the country rather than in the capital city of Landon, never addresses Parliament, and absolutely detests the public trappings that go along with his title. But he's also never one to shun duty. So when the venue to hold Countavia's annual Winter Charity Festival goes up in flames, he agrees to loan out his house for the event. What can go wrong at a simple house party? Unfortunately, his plans for fleeing the estate prior to this year's event go awry. Now he's hold up for with everything and everyone he doesn't want. Especially the tempting Juliana Radcliff, a woman who could very well unearth his darkest fears.

He sets his eyes on a very beguiling prey….

Being a spinster fits Miss Juliana Radcliff. It's the life the nuns who raised her had instilled in her and still instill as she continues living at their convent working as a reader to inujred soldiers returning from the war against Napoleon. But when Mother Superior falls ill and insists Juliana take her place at the yearly charity house party at Frost Lake, she encounters an enchanting man hiding in the shadows who opens a whole new world to her.

Only to realize true love never comes without a cost….

Unfortunately, with house parties, so come rumors. When an arrogant peer stirs up trouble, can Leopold overcome his fears and confront his enemies to save Juliana's reputation? Or will he lose the one woman who truly accepts him for himself, forever?