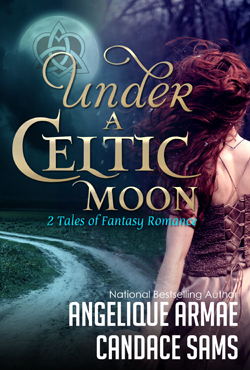 UNDER A CELTIC MOON is an anthology featuring two tales of Fantasy Romance.

Moira McKinley is Queen of Organized Chaos. She's surrogate mother to her eleven orphaned sisters, eats cereal for dinner, and grows window box herbs with a green thumb. In other words, she lives a pretty normal life. That is until she receives news that challenges everything she holds dear…

It isn't every day an Irish solicitor shows up on your suburban New York doorstep telling you your eighty-five-year-old granny has gone missing. And stranger still, reveals that the woman who has nurtured you for the last ten years isn't the soul you thought she was, but rather is some ancient guardian descended of the gods and whose first duty is not to her human bloodline but to a clan of immortal warriors tasked with saving the world.

That and the fact the gates of the Celtic Otherworld-Mag Mell-have just crashed, unleashing the vilest of Fae demons. And as an extra kicker, just in case all that other stuff isn't enough to cozy your brain up to, you and your sisters aren't really as batcrazy as you always thought. Those little habits you shucked up to nuisance, like waking up in the middle of the night wrapped in thorny briars…while still in your bed…are all par for the course when you're made up of stuff that feeds the dark side.

Stuff those Fae demons are on the hunt after.

Stuff those immortal warriors are determined to protect.

Stuff only missing granny holds the key to…

THE LAST KNIGHT By Candace Sams

Garrett Bloodnight is bound by his promise to protect the citizens of Great Britain. Through two World Wars, he has upheld the laws regarding immortality, as well as every regulation devised by politicians. For his long-revered service, and his steadfast loyalty, he has been awarded a life of luxury in hills of Cumbria. It's there that he hopes to live out eternity. Alone but content.

When a young beauty enters his domain as a new immortal, Garrett is ordered to train her for service to the queen. No one told either of them that their paths were meant to cross, and in the most bizarre way.

Whether they like it or not, Garrett and his apprentice are inexorably drawn into very old, and dangerous obligations. Secrets over a thousand years in the making come to rest on the front steps of Bloodnight Hall. For the immortals living there, destiny's call must be answered. They have no choice. They either stand together or they will be destroyed by magic.